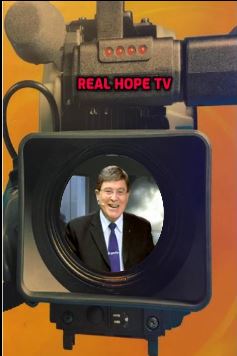 Real Hope TV was launched in September 2018 by Pastor Jim Patterson after 59 years of communicating the GOOD   NEWS  as a Pastor, Evangelist and Gospel Singer, also as a Presenter on Radio since 1972 and for two years as a Guest   Presenter of several weekly  broadcasts on Revelation TV from 2011 to 2013.
Jim’s passion for broadcasting began as a promise to God on Friday 10th April 1959, when he was in a very dark place,   because of a double bereavement.
His prayer was simple – “O God if You can heal my broken heart, dry my tears and give me HOPE, I’ll go to the nations of   the world and tell them of the HOPE You gave me”.
God answered Jim’s prayer immediately and since then, he has been on A MISSION OF HOPE.  From 1990 – 1996 Jim   pioneered and directed a Mission in Uganda , East Africa, called Uganda Mission Of Hope.
Whether behind a pulpit, or in front of a mic on radio or a television camera – Jim shares about “A Future with HOPE”.